This tale actually occurred a couple of weeks ago but I haven’t gotten around to telling it yet. Life has again “gotten in the way”.

I was doing my normal thing, diving under boats to raise the boat dollars needed for our cruise, when the strangest thing happened. I was diving in a marina in Sausalito called Clipper and out off of clipper two is a log tied breakwater. Just a bunch of logs tied end to end to cut any wakes from outside the marina. This is a natural hang out spot for our local harbor seals. You can usually see a dozen or more sunning themselves on this perfect perch. 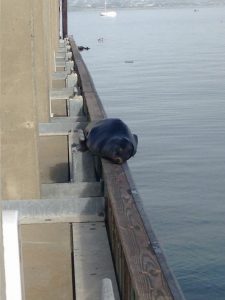 Anyway, here I was diving a boat on the end of the pier and saw 20 or so seals on the berm. As I said, just a typical day. Now when I gear up and get ready to get in the water, these guy’s are always curious. They watch you like a hawk to see which way you are going to swim. Toward them, or leave them alone.

I hopped in the water and started scrubbing the boats waterline just on snorkel. After I finished that, I got this funky weird feeling. You know the one with the hairs standing up on the back of your neck? It happens sometimes so I just got back to work. I grabbed my air hose, stuffed it in my weight belt, and dove under the boat to do the hull. About 10 minutes into it without losing that feeling, I surfaced and happened to look toward the log dam. Curiously all the harbor seals had departed…….Hummm.

Not one to ponder anything too long I dove back under the boat (when I’m working I tend to get hyper focused). Scrub scrub scrub. Then I get the first bump. Now this is nothing new. Harbor seals are playful little rascals and I often get a bump from them while under a boat. They will even nudge me away from the boat at times. I thought nothing of it……. Bump!

Well, that one was a little harder. Did I do something to annoy them? Bump. Bump. BANG. BANG! That one hurt guy’s! All in all I probably got nudged about a half dozen times. Now this is NOT normal.

I look to my left and in surprisingly good visibility for that marina, I see a shape slide by about 10 feet away. It’s a shark. It went by fast and I wasn’t prepared to see it, so I have no idea what kind it is. Now you have to understand that everything looks bigger under water. Much bigger, but I swear the thing looked like it was about 12 feet long. It was probably about 6. It’s really unusual to see sharks in that area so I’m rather dumbfounded as it slides by again. It’s still about 10 feet away and this time I see harbor seals nailing it in the side facing me. They keep hitting it and hitting it, driving themselves between me and him. My “nudges” were nothing compared to the number they were doing on this guy.

This only happened for a couple of minutes and was over before I knew it. Quite the show though. I slid over to the dock and pulled myself out of the water, and once clear I look over to the log berm. Pop, pop, pop. These seals start hopping out of the water and back on there sunning spots, each looking my way as they get settled. Talk about incredible.

Anyway, after about 5 minutes, I hopped back in the water and finished up that boat with no other issues. I climbed out, packed up my gear, and headed to my next boat with a little wave to my friends.

I don’t know the motivation or the reasoning behind what happened, but I’ll take it and thought I would share.